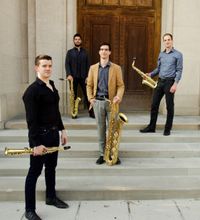 Now celebrating its 80th year, Tri-County Concerts is presenting a virtual season. Each concert can be viewed during a two-week window on a pay-what-you-wish basis after a one-time free registration at https//:www.tricountyconcerts.org/emerging_artists

Our first concert features the Sinta Quartet, which has earned high praise for its virtuosic performances, compelling recordings, and exciting repertoire, which includes saxophone standards, commissions, and transcriptions of master composers’ works.

Described as “tight-knit ensemble exploding with power and virtuosity” (The Boston Musical Intelligencer), the Sinta was the first saxophone ensemble to win the Concert Artists Guild Competition’s First Prize.

Their program for Tri-County Concerts starts with works from the Renaissance, traversing musical styles though to the Romantic era: from Tallis, Praetorius, and Victoria, to Bach, Beethoven, Grieg, and Dvořák; and concludes with traditional spiritual and Irish songs.