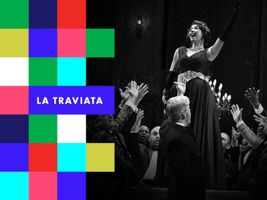 In October 2015, rising soprano Lisette Oropesa made her role debut as Violetta in a new production of Verdi’s La traviata at the Academy of Music, serving notice that this would be one of the definitive roles of her career.

See La traviata and the entire Opera Philadelphia Channel lineup with a Season Pass for $99 or rent La traviata for seven days for $20!