Karl Denson wears several hats, literally and musically. He's a jazz cat and a funk brother, and it must be tough to keep track of which band he's in at any given moment; he has at least three, including The Greyboy Allstars and The Karl Denson Trio. But it's Karl Denson's Tiny Universe that filled our studio recently, sharing the most song-driven of Denson's projects — though it doesn't lack for improv, as you'll hear.

In addition to being a busy genre-buster, Denson is a family man and a cut-up who poses for pictures, invites Facebook fun and generally has a merry time with his friends and bandmates during our session. But the levity belies a drop-dead talent who can howl with the best jazzbos and even groove with the jam-band crowd. There's a spiritual center to it all that finds some surprising links to Bob Marley on his latest CD, Brother's Keeper.

It's no surprise to find that the band he leads feels like a family. It'd be crazy not to befriend him, let alone seek out his music. 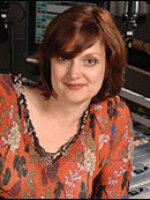