Earlier this year, after half a century in Ukraine, composer Valentin Silvestrov fled the country along with millions of others. He is now in Berlin with his family. At 84, it is unclear when, or whether, he will return. “I don’t know how we lived to see this,” he told the New York Times in March. Like other refugees, he finds himself adrift in a welcoming culture, one far from his homeland.

His departure, coupled with the ongoing conflict in the region between Ukraine and Russia, makes it hard to overstate the timeliness of a new recording from the Kyiv Chamber Choir, Silvestrov’s Maidan 2014 (Cycle of Cycles). Composed in 2014, recorded in 2016, and now released on ECM, this wave of choral inspiration emerged in the wake of Ukraine’s “Revolution of Dignity” (known as the “Euromaidan”), when violent protests against then-President Viktor Yanukovych erupted in Kyiv, resulting in his departure and the deaths of scores of citizens.

Silvestrov, previously not involved in politics, chose to react not with fury or outrage, but with these seven cycles — somber, slow-moving and fragile. Originally scoring them for voice and piano, he later arranged them in these versions for an a cappella mixed choir.

The first four cycles form the album’s nexus. Each begins with an arrangement of the Ukrainian National Anthem, followed by other songs with either traditional liturgical texts (like “The Lord’s Prayer”) or words by poet and ethnographer Pavlo Chubynsky (1839-84) and writer Taras Chevchenko — the latter highly regarded as a cornerstone of Ukrainian literature.

The final three — Four Songs, Diptych and Triptych, with texts by Chevchenko — complete an extended, bleak landscape, albeit tempered with hope. (Or perhaps that is what we, as listeners, want to believe.) On the whole, Silvestrov’s language is unadorned, with luminous use of consonant thirds and fifths, blooming among long, slow-moving phrases — all of which show off the choir’s intonation and precision.

Most of the sequences evoke the solemnity and modesty of early medieval chant — simplicity in service of the profound. And from a region renowned for massed men’s vocals, the basses anchor with granitic presence and resonance, at times as if emanating from some vast cavern.

Mykola Hobdych, who founded the 21-voice choir in 1990, conducts with strength when needed, such as during the bold harmonies of the “National Anthem” that opens Cycle II, and its striking echo effect with voices bobbing up and down between intervals. But he and the singers are equally persuasive in the album’s many gossamer stretches, when the ensemble’s tone seems to hover like mists over a lake.

Engineer Andrij Mokrytskij recorded the group in St. Michael’s Cathedral in Kyiv, and captured the choir’s translucent splendor with exactly the right amount of resonance to enhance Silvestrov’s phrasing. And in a bittersweet postscript, this project may enable the composer’s utterances to reach an even larger audience, outside of his besieged homeland. In the liner notes, his friend Tatjana Frumkis writes: “It is a sad paradox that the war in Ukraine has helped Silvestrov achieve fame.”

Perhaps the last of the Four Songs, “My Testament,” best sums up Silvestrov’s poignant message, ending with a striking, faint hush after the words “With softly spoken kindly word, remember also me.” It’s an elemental plea for the people of Ukraine, their culture, and their spirit. 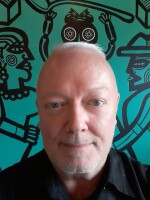