WRTI Your Classical and Jazz Source | By Mike Bolton

Some operas are so rarely produced today that they assume an almost mythological status. Giacomo Meyerbeer’s grand Les Huguenots and Italo Montemezzi’s verismo thriller L’amore dei tre re are two examples that come to mind. Another that fits that bill is Luigi Cherubini’s 1797 French-language opera Médée.

It’s so infrequently performed in the United States that The Metropolitan Opera had never staged it until this past September, as the opener to its 2022-2023 season — in a production that will air on the Toll Brothers-Metropolitan Opera International Radio Network this Saturday at 1 p.m. at WRTI 90.1 FM and wrti.org.

What took the Met so long? For one thing, Médée is a work with a complicated history, featuring one of the most difficult title roles in opera. And you can’t talk about this work without acknowledging the seismic impact left by Maria Callas. But first, let’s address the opera itself.

Cherubini (1760-1842) was an Italian composer who made his way to King Louis XVI’s court and stayed in France after the fall of the monarchy. He composed Médée in the popular opéra-comique style. But while “comique” is in the genre’s very name, its operas feature spoken dialogue between musical numbers, rather than necessitating a comical story. The most famous opéra-comique is Georges Bizet’s extremely popular tragedy Carmen.

The myth of the filicidal Medea and her husband Jason’s quest for the golden fleece had graced the lyric stage in operas by Francesco Cavalli (1649) and Marc-Antoine Charpentier (1693), among other settings. Critical and popular response to the premiere run of Cherubini’s Médée in 1797 might be called fair-to-middling, and the opera was not immediately revived in France.

The work was translated twice into German, first for an 1800 premiere in Berlin, and again two years later in Vienna. Cherubini supervised that Austrian production, cutting some 500 bars of music from the score. The spoken script was trimmed when composer Franz Lachner set the dialogue to music as recitatives in 1855, using the 1802 German translation. An Italian translation with recitatives composed by Luigi Arditi premiered a decade later in England.

The opera finally premiered at La Scala in 1909 as Medea, in an Italian translation of Franz Lachner’s 1855 German version, which has become the standard performing edition. This Italian hybrid of Cherubini’s Classical opéra-comique with Lachner’s through-composed Romantic-style recitatives is the edition that Maria Callas used when she debuted the role at the Maggio Musicale in Florence in 1953.

Callas was influential in a variety of roles: Bellini’s Norma, Donizetti’s Lucia, and Puccini’s Tosca to name but a few. But her association with Medea is different. While other singers have championed and excelled in those other roles, no one does Medea like Callas does Medea. It is a dramatically, vocally, and emotionally challenging role, frequently keeping the soprano near the top of their register. Callas brought her interpretation to La Scala, Covent Garden, and even Epidaurus for legendary performances, several of them documented by audio recordings available on YouTube. One particularly fiery performance from the Dallas Opera documents Callas channeling her anger into Medea after hearing that her relationship with The Metropolitan Opera had been severed by its General Manager, Rudolf Bing.

While Callas defined the role of Medea, other divas that have taken on the role, like Gwyneth Jones and Leonie Rysanek, were perhaps unable to establish their interpretation of the sorceress before a wide public due to the opera’s infrequent performance history at major venues. That is, until the Metropolitan Opera mounted Medea for one of its biggest stars, Sondra Radvanovsky, in a production broadcast internationally as part of its Live in HD series in October.

Since her Met debut in the cameo role of Countess Ceprano (Rigoletto, 1996), Radvanovsky’s theatrical and musical skills have grown in wide-ranging roles of the noble Donna Anna (Mozart’s Don Giovanni), the flirtatious Musetta (Puccini’s La Bohème), and an array of Verdi’s great heroines. She has excelled in three roles associated with Callas, too: Tosca, Norma, and Leonora (Verdi’s Il trovatore). Her traversal through the extremely difficult bel canto heroines, like Donizetti’s Tudor Queens of Anna Bolena, Maria Stuarda, and Elizabeth I (Roberto Devereux), have musically and dramatically laid the foundation for her to add Medea to her repertoire. The Canadian soprano has brilliantly managed her career, moving into heavy roles like Lady Macbeth and Turandot with extreme intelligence and a keen understanding of her abilities; this Saturday afternoon broadcast should be an extraordinary display of her musico-dramatic prowess and an exciting afternoon of music theater.

“There is no point in reviving Medea unless you have a soprano who can embrace the dark camp inherent in the tale,” commented the estimable Alex Ross in The New Yorker. “Radvanovsky met the challenge with zest, her voice smoldering with fury from the outset.” OperaWire critic David Salazar, reviewing the same production, came to a similar conclusion: “Radvanovsky, one of the most profoundly moving opera artists on the planet, made it her own,” he wrote. “This was by far Radvanovsky’s most adventurous and riveting interpretation at the Met Opera in her storied career.”

Tune in on Jan. 7, 2023, to experience Medea in the Toll Brothers-Metropolitan Opera International Radio Network Saturday matinee broadcast on WRTI 90.1 FM and wrti.org. 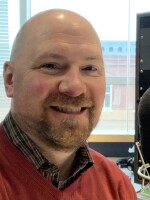