Classical music is often described as traditional. That’s typically a statement of longevity, or perhaps a guardrail or tool of gatekeeping. Another, more useful way to think about it: classical music has long drawn from the traditions of the people who write it. By using that definition, we allow for a more inclusive root system, spanning various European folk musics as well as Negro spirituals and more.

The noted Chickasaw composer Jerod Impichchaachaaha’ Tate had this realization in the early 1990s, quite suddenly, at the urging of his mother. He hadn’t even considered composing at the time — he had majored in piano performance at Northwestern — but she commissioned him to write a ballet based on Native American stories. That work was Winter Moons, which he recorded with a coalition of friends and colleagues from the Cleveland area, playing the piano himself, in 1995. It finally saw commercial release this year, on Azica Records.

Tate has said that the piece opened a door for him — showing that he could tell the stories of his people through composition. He’s been doing so ever since: he is one of the best-known Indigenous composers, and a key developer of what he calls American Indian classical music. This year, in addition to Winter Moons, his five-movement Waktégli Olówaŋ (Victory Songs) appears on the Lakota Music Project’s self-titled debut, just out on Innova. And his “Moonstrike,” commissioned by Apollo Chamber Players, lends a title to an album also featuring works by Jennifer Higdon and Pierre Jalbert.

While he came to composition abruptly, Tate had a strong upbringing in classical music. His father, Charles, works in tribal law and politics but is also a pianist and baritone. His mother, Dr. Patricia Tate, was a choreographer, dancer and professor; because of her foundation in ballet, Tate grew up listening to the great ballet repertoire (Petrushka, Daphnis et Chloé, Romeo and Juliet and others) and had plenty of education in the structure of the form.

This makes Winter Moons one of his most accessible works, and a great introduction to his style. Tate’s music overall embraces a degree of thorniness, tonally and texturally speaking, but this earliest work is accessible to a listener more accustomed to standard classical repertoire. It also sets the table: listeners will recognize musical gestures from Winter Moons as they explore his later catalog.

The piece’s title comes from the American Indian tradition of telling stories during the full moon in winter. Tate’s ballet is in fact a series of stories, woven into four movements with narration. This set of legends comes from Northern Plains and Rocky Mountain tribes, as Tate’s mother was teaching at the University of Wyoming at the time and wanted to focus on stories from that region. Tate is a citizen of the Chickasaw Nation, located in south central Oklahoma, so he made sure to communicate with the tribes whose stories he was adapting, to ensure that he properly honored their traditions.

“Tribal people in North America, we’re fluid in how we feel monolithic at times and also very diverse at times,” Tate tells WRTI. This informs his method of composition; his practice is to incorporate his own and his fellow native peoples’ music.

The ballet’s opening cello solo could accompany a statement of intent written by Dr. Tate: “According to the Osage, the Moon is a woman, and all women are symbolic of life. In the ballet, the four moons represent the four seasons of life. Winter Moon tells of the culmination of life as she rises majestically to the spirit world.” The rest of the orchestra bursts in with a brief and beautiful theme on an angular melody in unison. We’re then introduced to the Moon herself as a flute, joined by a bassoon. Then the rest of the ensemble joins in, calling back and forth with the two winds until they join together again to close the section.

A new melody, introduced on flute, is interrupted by the percussion section to open the second section of the first movement, and the first legend: “Puberty Blessing Songs,” a Lakota story. The flute melody is repeated with variations in conversation with more percussive sections that could spark recollections of dissonant ballet standards.

The next movement’s story is the Shoshone legend of “The Indian Spirit at Mesa Falls,” which is located at a point along the Snake River west of Yellowstone National Park. The Spirit is of a woman who chased after her lover as he was swept away by the river, only to be taken under herself. The music begins placidly, evoking the flowing water and mainly acting as a pas de deux for the lovers. The orchestra becomes fuller as the water’s flow quickens, and downward passages paint a picture of the waterfall and the crash of water at the bottom, resolving with a lament for the fallen lovers.

Two stories compose the third movement: the Crow legend of “Red Plume and the Medicine Wheel” and “The Origin of Bitterroot,” a story told by the Salish and Pend d’Oreilles tribes. The Red Plume movement begins sparse, becoming wilder as more instruments join in, conveying the difficulty of the journey. Later, the music grows consonant and calm, with a simpler harmony that represents his steady leadership.

“She Runs With the Wind,” the ballet’s final movement, is the title of a poem by Scot Shuman. The opening follows the poem, moving at a brisker tempo, until the arpeggios suddenly stop, leaving only a low percussive pulse. The orchestra slowly builds back up to a section reminiscent of the introduction of the Winter Moons to close the ballet.

Originally a part of the ballet, “Spirit Chief Names the Animal People” is a companion piece on the album – based on an Okanagan story of the Great Chief giving animals new names, and the animals petitioning for certain names and powers. The animals are represented in small character pieces: the mischievous coyote; the lumbering bear; the swimming and jumping salmon; the majestic eagle; and a reprise for the coyote, who wanted to be first to the naming ceremony but slept in and showed up late.

This recording was made to take the ballet on tour, and Tate chose his colleagues and engineers well — for a chamber orchestra, the performance is robust beyond its size. And though there is no narration, the album’s liner notes provide some context for the stories — some in summary, and some directly adapted from the original narration of the ballet. Helpfully, the premiere performance is available on Tate’s YouTube channel, with a VHS transfer of the Colorado Ballet’s performance overlaid with the recording.

“Fine art is one of the most inclusive inventions ever,” says Tate. “It begs you to bring your human identity into the music.” When he was called to become a composer, he immediately did just that, and realized that this was not a new concept: composers, even those hailed for individual genius, have brought their culture into their music for centuries. What Winter Moons illustrates is the powerful potential in a classical tradition that empowers some of those stories to speak for themselves. 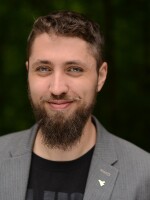