Arts Desk
Jazz Albums of the Week
Every week on the air there's a special focus on one particular jazz album. Check them all out here!

Jazz Album of the Week: Maria Schneider's Grammy-Winning 'Data Lords,' A Tale of Two Opposite Worlds

WRTI Your Classical and Jazz Source | By Courtney Blue

March 15, 2021. With a grand stroke of prescience, NEA Jazz Master Maria Schneider crafted a double album about being polarized by the demands of a digital society and longing for human connection, all before the onset of the COVID-19 pandemic.Just before we were forced to be locked indoors and working from home, long before the coveted “snow days” off were cancelled, and right on the precipice of time when human interaction in the physical world would be completely restricted, only relegating us to grip onto technology even tighter, the advent of a worldwide pandemic capitalized Maria’s ominous testimony.

On Data Lords, Schneider tells a tale of two opposite worlds: The Digital World vs. Our Natural World and her struggle to break free from one in attainment of the other. Ultimately, what we get are two completely different sounding albums. One side is cacophonous, the other euphonic.

Side one, The Digital World, spins a twisted tale about the dark manifestations of The Internet and Big Data. Side two, Our Natural World, is a gorgeous saga about the clarity that comes when humans break free from the clenches of digital devices and reconnect instead with nature.

Even with endless conduits for connectivity these days, people are more disconnected than ever. Kids are isolated, more drawn toward their individual worlds filled with technology. Schneider believes this keeps us from reaching our creative potential.

Queue The Digital World’s opening track, "A World Lost." In the liner notes for this song, Maria divulges stories of her childhood, pre-Internet, wherein she and her sister would search outside, through the dirt, for rocks that they could bring home to make into faces or animals out of or whatever they would dream up.

It’s this companionship with nature that Maria strives for us to return to. Before we get there, though, we have to make it through The Digital World, which can be a difficult task, depending on your tolerance for noise or ardency for the avant-garde.

Suffice to say, you might not want to listen to The Digital World while doing your taxes. Brass horns bark at us. Cymbals crash. An accordion flitters in the background like electricity traveling through wire. A piccolo replicates the sound of robot computing… something. It could disturb even the most wildly tuned ears among us. But that’s just the point. That’s the story Maria is telling here—a disruptive, dramatic tale of the constant demands of a digital society and the evil manipulations of data miners.

Prominent on both sides is saxophonist Donny McCaslin, famous for being the bandleader on David Bowie’s final album, 2016’s Blackstar. Schneider co-wrote the Grammy-winning song "Sue" with Bowie for the album as well. Bowie was enthused by Maria’s darker side to composing and encouraged her to dig deeper and expand upon it. With side one of Data Lords, she did that justice.

Much like the subject matter, these sounds intrude your space and command your attention. Typifying this is the discordant and jarring electric guitar of Ben Monder who features prominently on The Digital World but is absent for Data Lords second half, where more organic sounds reign supreme.

Eventually, we are able to break free from the relentless racket of the digital realm and finally make it to that second half, Our Natural World. No longer isolated, here we enter into the exploratory physical world. This is the territory that breeds creativity. The land of nature, art, poetry, and song.

Finally, the dark clouds have parted and Our Natural World waltzes in like a very welcome breath of fresh air, uninhibited by gravity or dark noise. What we have here is lilting, beautiful. and free. We arrive at this new terrain subtly, with the album's opener "Sanzenin" and it feels like a sunrise at dawn casting first light on a war-torn land that saw battle the night before.

"Sanzenin" is an ancient Buddhist Temple in Kyoto, Japan with magnificent 1,000 year old gardens surrounding it. This song can conjure up feelings of strolling through its garden, rife with the fluttering of Gary Versace’s accordion like the flapping of butterflies wings.

On "Stone Song" Maria manages to make something magical out of nature, much like she did as a child, using the rocks and stones she would dig up with her sister. This time she makes a song out of rocks and stones using an instrument called Ishi No Sasayaki.

It’s an orb-shaped percussive instrument kind of like a shaker, but made of clay with stones inside. The words "Ishi No Sasayaki" translate as “secret voice inside the stone.” Resonant of a whimsical childhood in nature, the song is playful and buoyant.

"Look Up" reminds us to do just that—to simply look up from our devices, which Maria thinks “the world needs to make a concerted effort to do again, whether looking up at the sky, trees, birds, clouds, or simply at each other.”

There is triumph in these songs, whether you're aware of the album's concept or not, it simply feels like glory has been achieved. No more so is this evident than in the albums closer, "The Sun Waited For Me," —a rewarding conclusive ballad. The song is inspired by a Ted Kooser poem titled “march 20. The vernal equinox.”

The changing of seasons is a fitting metaphor for the different moods on the two albums, but also applicable to a general sense of awakening achieved by the end of each one. Like the song, the sun and natural world are there waiting for us. We just need to make the effort to disconnect from devices, get up, go out, LOOK UP and connect to our natural world.

Women’s History Month on WRTI is supported by Temple University, which celebrates the legacy of Agnes Berry Montier, class of 1912, and the first Black woman to earn a medical degree from Temple. 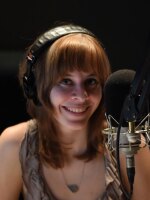 Courtney Blue
Ms. Blue, or "DJ CB," has been on a musical path her entire life - as a young child copying radio shows to tape cassette, and as a student of various musical instruments and dance genres. Her first foray in the industry was with WDCR at Delaware County Community College, where she was hired as a DJ for the student-run station and quickly became station manager, a position she held for two years. There she ushered in new technology and programs to embrace the early days of podcasting.
See stories by Courtney Blue
Classical: Now Playing
View Playlist
Jazz: Now Playing
View Playlist